A strong solar storm is battering the Earth and could amplify the planet’s northern lights displays.The solar storm erupted from the giant sunspot AR1520 (Active Region 1520) which is actually a group of sunspots that at its peak may have stretched across 186,000 miles of the sun’s surface. The eruption sent a wave of charged solar plasma toward Earth and is not expected to pose major risks to satellites and spacecraft in orbit, or power systems on Earth.

The sun is pictured in this NASA handout satellite image taken July 12, 2012, shortly before it released an X-class flare. This image combines two sets of observations of the sun from the Solar Dynamics Observatory – light in the 171 Angstrom wavelength, which shows off giant loops of solar material overlying the middle of the sun over the region where the flare originated and a magnetogram, which highlights magnetic fields on the sun. NASA’s estimates indicate that the coronal mass ejection associated with this flare is travelling in an Earth direction at over 850 miles per second. 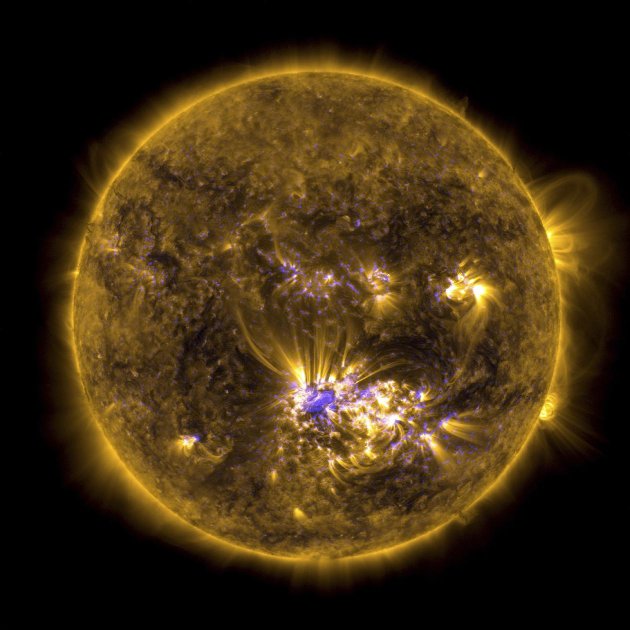 This image combines two sets of observations of the sun at 10:45 AM EDT, July 12, 2012 from the Solar Dynamics Observatory (SDO) to give an impression of what the sun looked like shortly before it unleashed an X-class flare beginning at 12:11 PM EDT. The image incorporates light in the 171 Angstrom wavelength, which shows off giant loops of solar material overlying the middle of the sun over Active Region 1520 where the flare originated. The second set of observations is called a magnetogram, which highlights magnetic fields on the sun. Together these kinds of observations can help scientists understand the magnetic properties of the sun that lead to giant explosions like flares.

This July 11, 2012 image of the Sun provided by NASA’a Solar and Heliospheric Observatory shows gigantic sunspot AR 1520. One of the biggest sunspots in years, AR1520, is turning toward Earth and harbors energy for strong solar flares. NOAA forecasters estimate an 80% chance of M-flares and a 25% chance of X-flares during the next 24 hours 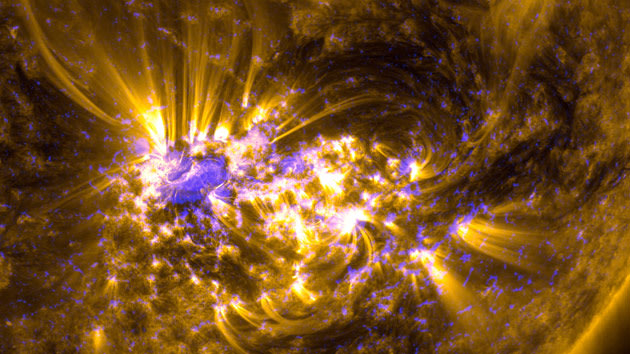 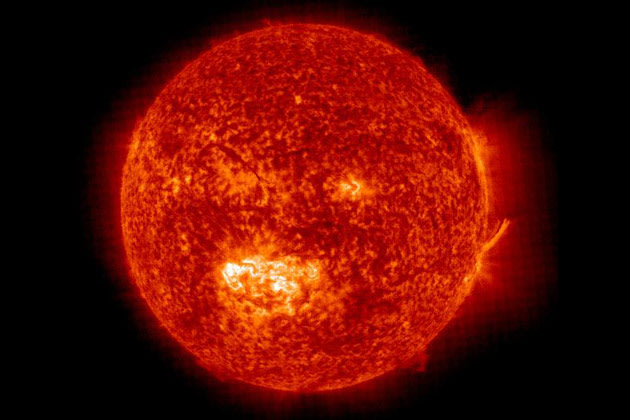 This NASA image, captured by the Solar Dynamics Observatory, shows the M5.3 class solar flare that peaked on July 4, 2012, at 5:55 AM EDT. The flare is shown in the 131 Angstrom wavelength, a wavelength that is particularly good for capturing the radiation emitted from flares.