A Day In Romantic Venice

Venice is a dream destination for many and is deemed as one of the most romantic cities in the world.

Words defy you as you look upon Venice. To say it is beautiful is an understatement. If I could pick up as many adjectives as I can get, I will say it is magical, romantic, unreal, picturesque, unique and vibrant! And yet, I was tongue tied the moment I landed and looked at the vast expanse of water, the small little canals bordering the houses, the arches of bridges connecting land and water and ancient churches dotting the shores.

We were still in the train when we got our first glimpse of Venezia. It was early morning as the train reached the station. We had decided to stay in a small little island called Murano, known for its glass industry. And that is when I heard of a water bus. It was a 45 minute wind swept journey as the bus took us through the canals to this quaint island. Beautiful bridges, bright boats and colourful churches greeted us as we walked in search of our home-stay. 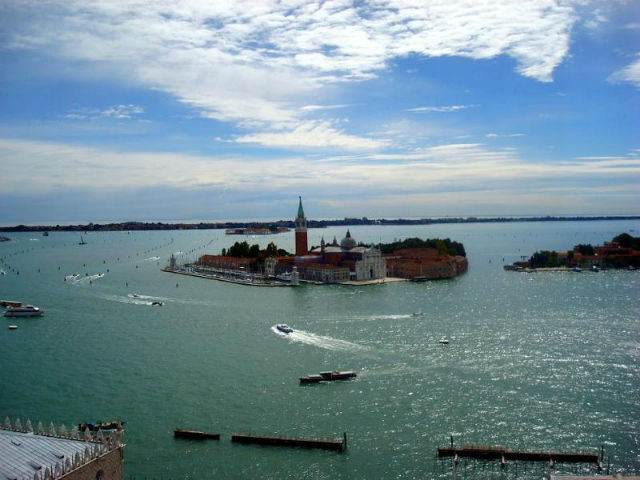 We did not realize that we would need to alight at the last stop in the island and in our eagerness to explore Murano on foot; we got off well ahead of our destination. The feet ached as we trudged through the sleepy island, dragging our baggage behind us. We finally reached the glass museum and the church of St Mary and Donatus. Most shops were just opening as we finally made our way.  Besides the museum, we stopped by at the factory and saw how glass was moulded in Murano. Each shop window looked extremely colourful with glass figurines and hand painted masks as we gazed into a world of hues reflecting the skills of these people.

And then our Venetian adventure began. We had already lost our way in Murano but we managed to refresh ourselves and return to the mainland with a map in hand. We were now in search of another destination—San Marco. The cobbled streets of Venezia were long and winding; they often took us to a dead end. We crossed bridges across canals or stopped at the church and asked for directions. We could have taken the water bus directly to San Marco, but nothing like discovering a city through its narrow lanes and losing ones way through them. And what a sight it was when we reached! Millions and millions of tourists had converged here as we realized that San Marco is not just a square but a phenomenon.

It dates back to the 9th century and it is said that in 832, the first church dedicated to Evangelist St Mark was consecrated. According to a legend the remains of the saint was stolen by two Venetian sailors from a monastery in Alexandria and brought to Venice. The symbol of the winged lion became the symbol of the city and St Mark, its patron saint. One cannot miss the Piazza and the Piazzetta, with its two columns.

St Mark’s Basilica, St Mark’s Campanile, Doge’s palace and the clock tower are housed here. We waited in a long queue that took us into the Basilica. Unfortunately, no photographs were allowed. The plan is like a Greek cross and the facade is planned in two orders. One can go on and on about the architecture here but you cannot miss the four bronze horses here, which were brought from Byzantium after the fall of the city during the fourth crusade.

Another sea of humanity was waiting at the entrance of The Ducal Palace, which was the residence of the Doges until the fall of the Venetian Republic in the 18th century. Loud, flamboyant and yet beautiful, it was filled with beautiful frescos, sculptures and carvings etched in gold. From Adam and Eve to Jupiter and Mars, all Gods and Godlike mortals grace this palace.

Paintings adorned these walls telling you stories from mythology and history as you wondered if there was a difference between the two. We moved from one room to another, from their apartments to the halls, until we came to the Bridge of Sighs, the bridge that linked the Ducal Palace with the prisons on the other side of the canal. It is called so, as poets imagined prisoners sighing as they walked up to the prisons. Dark dingy dungeons were a perfect foil to the grandeur of the council rooms as we returned back to the square, sighing!

We climbed a tall tower; actually we were uplifted to see views of Venice. Huge bells hung aloft there and one of the bells called ‘marangona’ used to be rung to announce the beginning and the end of the days work of the carpenters and craftsmen.

As we walked back to the square, we were besieged by the pigeons who knew who were here to feed them or who wanted to just pose with them for a photograph.  The day was almost over as we deliberated between a sunset canal tour or a ride in the gondola and chose the former.  The cityscape changed as the sky changed colours myriad times…from pink to dark blue to purple, as we sailed along.

And then came the moment at the famous Rialto Bridge. If San Marco was the political and religious centre of Venice, Rialto was the economic centre, home to the markets, especially the famous fish market. We clicked pictures continuously as the bus sailed through and the sheer montage of colours and lights allured me. We returned to San Marco to enjoy a romantic dinner by the wharf. The evening was peaceful, night was young and nothing could possibly go wrong..but then, what is a trip without a dash of misadventure !

It was late night as we walked around, soaking in the moment. The lights of San Marco with its gentle strains of music lured us and we were in no hurry to leave. We were told that transport was there till midnight and we knew the route to Murano by rote. So, as we waited at the stand for our water bus to come, we thought there was nothing to worry about until the last passenger took another bus. And then we realized that we were virtually stranded in Venice as the last bus to Murano had departed almost a couple of hours ago. But we were lucky as the lady who was shutting down the counter heard us say Murano and sent us along with the lone passenger in the bus. As the canals plunged into darkness and the passenger reached his home, the bus suddenly took a detour in the canal and took us back to our little island. We weren’t sure if that was meant to be, but the patron saint of Venice would have definitely watched over us if we had been stranded in his beautiful city.  For a change it would have been a different experience to be marooned in the mainland and not in an island.